Inspired by the 100th anniversary of North Carolina state parks in 2016, the N.C. Department of Information Technology set out to find a way to use technology to highlight these natural resources and make them more accessible to those unable to visit them easily.

The iCenter partnered with Google to participate in the Street View Trekker program. With a Street View camera mounted on a hiking pack, a team of DIT and state parks employees traveled the state over several months to capture 360-degree imagery of 30 sites. The imagery was then added to Google Street View.

In 2018, the Trekker returned to North Carolina to kick off the project’s second phase. A team of DIT employees captured imagery of 20  cultural and historic sites, as well as parks. The project was also expanded with 360-degree imagery, including indoors, from other cameras.

The project will continue to grow and evolve as a way to provide immersive, virtual access to all North Carolina has to offer. 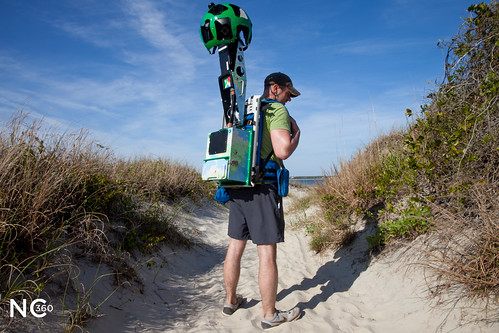 Hover over the photo to scroll through the photos on Flickr.

NCDIT staff and personnel from the Department of Natural and Cultural Resources coordinated with the parks and captured imagery from 30 trails with the Google Street View Trekker during the first phase of the project.

During the second phase in 2018, NCDIT employed interns from N.C. State's College of Natural Resources to help capture imagery of 20 additional sites with the Google Street View Trekker.

NCDIT's NCDIT Digital Solutions team and communications office collaborated to document the process and create a website making all of the imagery available.

To date, 50 sites, including 30 parks and 20 attractions, across the state have been captured with the Google Street View Trekker. Several more sites have been photographed with other 360-degree cameras that allow for indoor imagery.

The imagery spans the breadth of North Carolina from the mountains to the coast. See a full list of NC360 project sites.

Often, IT is seen as an administrative function in the workplace, but it can be much more. This project demonstrates how technology can directly add value to citizens.

Learn how you can use NC360